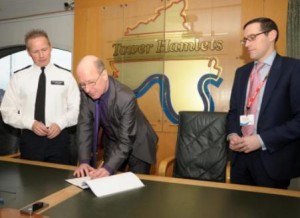 The May elections in Tower Hamlets will be the most complex to date but will have the strongest system to prevent fraud in London – and one of the most robust in the country.
A blueprint to ensure free and fair local elections and help to establish trust in the electoral system was launched by Tower Hamlets today by the main agencies involved in running the election.
Attending the launch today at Tower Hamlets Town Hall were: John Williams, Tower Hamlets Returning Officer; Tom Hawthorn, Head of Electoral Policy for the Electoral Commission; Tower Hamlets Borough Commander Chief Superintendent Dave Stringer; and Louise Stamp, Electoral Services Manager of Tower Hamlets Council.
Political parties and other organisations involved in the elections have already indicated they will sign up to the local protocol.
The protocol embodies a commitment to:
Work towards a free and fair election in May;
Ensure any allegations are correctly reported and investigated;
Campaign fairly within the law and abide by the Local Protocol.
The Local Protocol makes clear that the Metropolitan Police, local police and Tower Hamlets Council take electoral fraud extremely seriously and will investigate all allegations of irregularities robustly, promptly and fully.
Tower Hamlets has been working closely with the Police and Electoral Commission to establish an elections system which goes beyond what most other councils do and has the strongest anti-fraud measures possible within the current law.
Among the safeguards to ensure everyone can be confident of free and fair elections are:
Police will be based at some polling stations on election day and a mobile police team will respond as necessary.
Police will prevent large groups of supporters congregating around polling stations and obstructing voters. There will be a limit on numbers of activists who can gather outside.
A direct dedicated email address for agents and candidates to report concerns will be introduced from February.
Allegations made to the Returning Officer will be investigated fully and responded to within 24 hours. If the Returning Officer passes an allegation to the police, they will respond within 48 hours.
Extra training for polling officers around challenging voters they may have suspicions about.
At the beginning of March letters will be sent to every property in the borough confirming who we currently have registered at the property.
All late registration and absent vote applications will be verified against other council records.
Election officers have increased the number of visits they make to check properties.
Party campaigners will be discouraged from handling postal votes and asked not to assist with the completion of ballot papers.
John Williams, Returning Officer for Tower Hamlets, said: “The Electoral Commission has praised these new procedures as being amongst the most robust in the country. In drawing up our Local Protocol we have gone above and beyond the guidance of the Electoral Commission and it formally supports this new protocol.
“In the past there has been a breakdown in trust between individuals and organisations involved in the electoral process. The protocol addresses some of the issues raised and stands as a commitment to a more positive experience at future elections.”
Chief Superintendent Dave Stringer, Borough Commander of Tower Hamlets, said: “The Metropolitan Police are pleased to commit to this protocol, which we see as a positive step and an example of our joint commitment to prevent and detect electoral malpractice.”
Tom Hawthorn, Head of Electoral Policy at the Electoral Commission, said: “Any allegations of electoral fraud must be dealt with quickly and robustly and we are pleased that the Returning Officer and the Metropolitan Police have put in place plans to address concerns raised by voters, campaigners and candidates in the borough. We will now closely monitor the situation in Tower Hamlets and will say if we believe further action needs to be taken.”