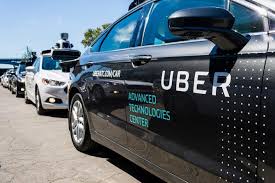 Toyota Motor Corp. will invest $500 million in Uber Technologies Inc. to jointly work on developing self-driving cars, the companies said on Monday, a bid by both to catch up to rivals in the hotly competitive autonomous driving business.

Toyota, one of the world’s largest carmakers, and Uber , the leading ride-hailing service, are widely seen as lagging the competition in developing self-driving cars.

Their deal deepens an existing relationship and reflects CEO Dara Khosrowshahi’s strategy of Uber developing autonomous vehicles through partnerships, rather than on its own.

The deal also breathes new life into Uber’s self-driving business. Since a self-driving Uber SUV killed a pedestrian in Tempe, Arizona, in March, Uber has removed its robot cars from the road, laid off hundreds of test drivers and shuttered operations in Arizona, its autonomous testing hub.

The investment values Uber at $72 billion, matching the valuation Uber received in a deal with Alphabet Inc. self-driving unit Waymo this year.

Uber will combine its autonomous driving system with Toyota’s Guardian technology, which offers automated safety features such as lane-keeping but does not enable a vehicle to drive completely autonomously.
The combined technology will be built into Toyota’s Sienna minivans, to be deployed on Uber’s ride-hailing network starting in 2021, Uber said.

The companies’ aim is to solve the enormously challenging problem of how to mass produce self-driving cars for shared fleets, including ride-hailing services.

Jeff Miller, Uber’s head of business development for strategic initiatives, said the partnership “really paints the picture of how we envision deploying autonomous technology in the long term.” That includes licensing its autonomous technology to carmakers and enlisting a third party to own and maintain the fleet.

The third party that will operate the Toyota autonomous fleet has not yet been chosen, Miller said.
For the Japanese automaker, the “agreement and investment marks an important milestone in our transformation to a mobility company as we help provide a path for safe and secure expansion of mobility services like ride-sharing that includes Toyota vehicles and technologies,” its executive vice president Shigeki Tomoyama said in a statement.

Self-driving cars
Toyota has been less aggressive than some rivals on moving toward full-fledged autonomous driving, expressing caution about the technology and focusing on partial autonomous systems like Guardian. But it has invested in research and plans to begin testing self-driving electric cars around 2020.

A Toyota official said the company would continue its research into self-driving technology, and that it would not combine its research efforts with Uber.

Uber has admitted its technology lags Waymo, and the crash in Arizona was a further setback in development and testing. The Toyota partnership puts pressure on Uber to resume testing on public roads, but the company has run up against regulators and politicians with safety concerns. Miller said Uber plans to have autonomous cars back on public streets by the end of the year.

Khosrowshahi, who took over Uber a year ago, has recently explored options that include more partnerships as well as a potential sale of the self-driving business, separate sources have told Reuters. The self-driving unit is a significant contributor to Uber’s losses, which in the second quarter were $891 million.
Uber has a deal to buy cars from Volvo, outfit them with Uber’s technology and maintain them, a more labor-intensive project than the Toyota plans.

The company also has a partnership with Daimler AG , in which the carmaker proposes to put its own self-driving cars in Uber’s ride-hailing network.

Previously, Uber and Toyota partnered on an electric mobility project. Two years ago, Toyota invested an undisclosed sum in Uber and the two companies partnered on a car-leasing program for Uber drivers. Uber has since shuttered its US leasing business.