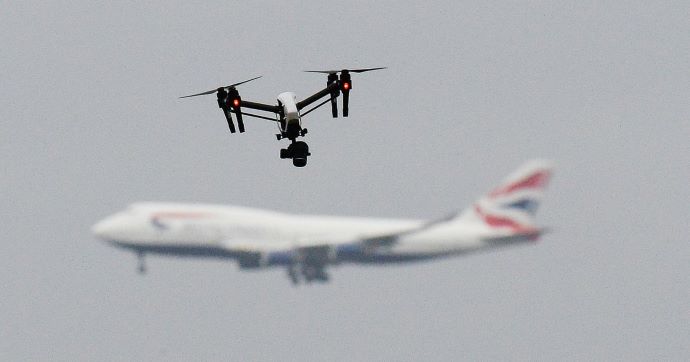 Thousands of passengers were delayed, diverted or stuck on planes on Thursday as the only runway at Britain’s Gatwick Airport remained closed into a second day after drones were spotted over the airfield.

The airport south of London – Britain’s second-busiest by passenger numbers – closed its runway on Wednesday evening after two drones were spotted. It reopened briefly at about 3am on Thursday, but shut 45 minutes later after further sightings.

The airport said all incoming and outgoing flights were suspended. Passengers were advised to check the status of their flights before heading to the airport, where many slept on floors and formed long lines at information desks.

Chris Woodroofe, Gatwick’s chief operating officer, said that roughly 10,000 people had been affected by the shutdown by Thursday morning, including 2,000 whose planes were unable to take off from Gatwick, 2,000 stuck at their points of origin and 6,000 diverted to other airports in Britain and Europe. He said drones remained in the area on Thursday morning.

“As I stand here, there is a drone on my airfield as we speak,” Woodroofe told Sky News.

A police helicopter was hovering near the airfield on Thursday morning as officers from two nearby forces hunted the drone operators.

“The police advice is that it would be dangerous to seek to shoot the drone down because of what may happen to the stray bullets,” Woodroofe said.

Any problem at Gatwick causes a ripple effect throughout Britain and continental Europe, particularly during a holiday period when air traffic control systems are under strain.

Passengers complained on Twitter that their flights had landed at London Heathrow, Manchester, Birmingham and other cities.

One traveller whose flight was diverted tweeted that passengers weren’t being told when they could continue to their destination.

Gatwick, about 30 miles south of London, sees more than 43 million passengers a year and serves as a major hub for the budget carrier easyJet. Gatwick said in a statement that it apologized for the inconvenience but had to put safety first. Gatwick briefly closed its runway last year when a drone was spotted in the area.