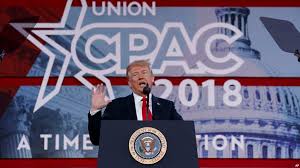 US President Donald Trump has rolled out fresh sanctions against North Korea-linked shipping assets, hailing the package as the “heaviest sanctions ever” levied on the Pyongyang regime.
Trump used a speech to conservatives just outside Washington to step up his campaign of “maximum pressure” designed to force North Korea to roll back its weapons programs.
“We imposed today the heaviest sanctions ever imposed on a country before,” Trump claimed at the end of a lengthy campaign-style address Friday.
In light of past US embargoes, that is likely an overstatement, but Treasury Secretary Steve Mnuchin confirmed the sanctions covered “virtually all the ships” North Korea is “using at this moment in time.”
Speaking to reporters in Pyeongchang Saturday on a visit to the Winter Olympics, White House spokeswoman Sarah Sanders said: “Hopefully we’ll see a change on the part of the North Koreans to start to denuclearise the peninsula, that’s what our focus is.”
She added: “I can tell you the president won’t make the mistakes the previous administration has and be soft or weak.”
Trump’s administration is locked in a nuclear standoff with Pyongyang, which is trying to develop missiles that could deliver an atomic weapon to major US cities.
The latest sanctions are designed to put the squeeze on North Korea’s already precarious economy and fuel supply.
In his speech Friday Trump had been expected to provide details of measures that target “56 vessels, shipping companies, and trade businesses,” but skipped that part of his prepared remarks.
“Frankly hopefully something positive can happen,” he said instead.
During a joint press conference with Australian Prime Minister Malcolm Turnbull, Trump said sanctions were only the first step.
“If the sanctions don’t work, we’ll have to go to phase two. Phase two may be a very rough thing,” he said, without elaborating.
Mnuchin said there were signs the punitive measures were starting to have an impact, but did not elaborate.
The North Korean military and broader economy depend heavily on imports of coal and oil from China and Russia.
China, Pyongyang’s only major ally, has steadfastly rebuffed Washington’s calls for a full oil embargo — fearing the chaotic collapse of the Pyongyang regime — but has accepted caps agreed at the United Nations.