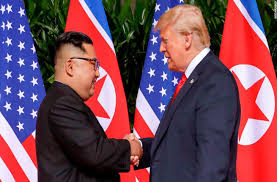 Donald Trump on Sunday stepped into North Korean territory, the first time a sitting US president has ever set foot in the former enemy country.

In a historic moment, Trump walked across the concrete blocks dividing North and South Korean territory in the Demilitarized Zone that divides the peninsula, where the two sides fought each other to a standstill in the 1950-53 Korean War.
Trump and North Korea’s Kim Jong Un shook hands across the border at the Korean Demilitarized Zone, in an historic photo-op as Trump seeks to make a legacy-defining nuclear deal with the North.

It is the third time the two leaders have met, and the first since a failed summit on the North’s nuclear program in Vietnam earlier this year. Trump briefly crossed the border into North Korea after greeting Kim.

There are as yet no indications of a breakthrough in the stalled negotiations to end the North’s nuclear program.
Kim said that his “wonderful” relationship with Trump would enable the two longtime enemies to get over obstructions, with their nuclear talks at a stalemate.

“I am convinced our relationship will enable us to overcome barriers standing in the way,” said Kim, adding as the two leaders held talks in the Demilitarized Zone that their close ties enabled a meeting to happen “just overnight”.

Trump voiced a willingness to welcome Kim to Washington. “I would invite him right now, to the White House,” Trump said as the pair met for the third time after summits in Singapore last year and a second meeting Hanoi in February that collapsed without an agreement.

Trump also said that teams from the US and North Korea would start meetings “over the next two or three weeks” for talks on Pyongyang’s nuclear program. Negotiators from the two sides will “start a process and we’ll see what happens”, Trump added.