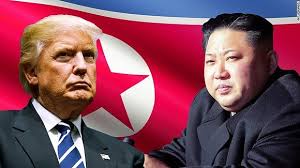 President Donald Trump is canceling the planned June 12 summit with North Korea’s Kim Jong Un, citing the “tremendous anger and open hostility” in a recent statement from North Korea.
Trump says in a letter to Kim released Thursday by the White House that based on the statement, he felt it was “inappropriate, at this time, to have this long-planned meeting.”
The president says the North Koreans talk about their nuclear capabilities, “but ours are so massive and powerful that I pray to God they will never have to be used.”