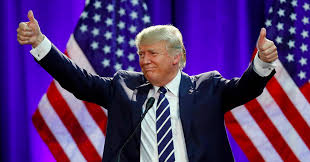 US President Donald Trump is set to visit Britain later this year, after he and British Prime Minister Theresa May tasked officials Thursday with finalising the details, her office said.
Following talks between the two leaders at the World Economic Forum in Davos, officials were set to work on planning a trip – something highly likely to be met with large-scale protests.
Within days of him taking office a year ago, May invited Trump to pay a prestigious state visit that would include a red-carpet welcome from Queen Elizabeth II.
Trump had been expected to travel to London earlier this month for the grand opening of a new, state-of-the-art US embassy.
But the trip was cancelled against the backdrop of a Twitter spat between May and Trump over his retweeting of British far-right propaganda, warnings of mass protests and his ongoing feud with London Mayor Sadiq Khan.
At their talks in the Swiss ski resort of Davos on Thursday, May and Trump discussed Iran, Syria, Brexit, future trade ties and jobs in Northern Ireland.
“The PM and president concluded by asking officials to work together on finalising the details of a visit by the president to the UK later this year,” a spokesman for May’s office said in statement.
The statement mentions simply a visit rather than specifically a state visit, which involves full British pomp: staying with Queen Elizabeth, a ceremonial welcome, set-piece speeches and lavish banquets.
Following May’s invitation last year, nearly 1.9 million people signed a petition calling for a Trump state visit to be blocked, claiming it would embarrass the monarch.
Jo Swinson, deputy leader of Britain’s Liberal Democrats, the fourth-biggest party in parliament, said: “Trump is a dangerous, misogynistic racist and is deserving of the protests he will undoubtedly face.
“If and when he comes to the UK, the Liberal Democrats will be at front and centre of the protests.”