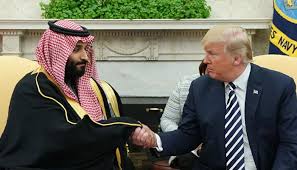 The U.S. and Saudi Arabia “have a great friendship”, President Donald Trump said Tuesday shortly before meeting with the kingdom’s Crown Prince Muhammad bin Salman who seeks additional arms sales and foreign investment.
Trump thanked the kingdom for its standing investments in the U.S., which a senior administration official tallied at approximately $12.3 billion in foreign direct investment as of 2016.
“The relationship is probably the strongest it’s ever been,” Trump said in later remarks at the White House. “We understand each other. Saudi Arabia is a very wealthy nation, and they’re going to give the United States some of that wealth, hopefully, in the form of jobs, in the form of the purchase of the finest military equipment anywhere in the world. There’s nobody even close.
“As I said before, when it comes to the missiles and the planes and all of the military equipment, there’s nobody that even comes close to us in terms of technology and the quality of the equipment. And Saudi Arabia appreciates that,” he added.
Bin Salman called Washington-Riyadh relations “really huge and really deep”, saying his country has created 4 million jobs in the U.S. directly and indirectly and noting “more opportunities” remain.
“That’s why we are here today, to be sure that we’ve tackled all the opportunities and achieve it, and also get rid of all the threats facing our both countries and the whole world,” he added.
The meeting comes as the Senate prepares to vote on legislation that would require the U.S. to withdraw its forces from Yemen. The bipartisan bill is the latest congressional attempt to check the presidential exercise of military force abroad.
Such missions are constitutionally required to receive congressional approval, and successive wars have been fought under what critics call dubious authorizations. Yemen is the latest such example where U.S. forces provide logistical and intelligence support to a Saudi-led coalition of largely Gulf nations fighting to oust Houthi rebels from what was already the Arab world’s poorest nation before the conflict began.
Congress never explicitly authorized the military operation, and pressure has mounted as Yemen’s humanitarian catastrophe has worsened over the course of the three-year campaign.
Still, the bill is unlikely to clear the Senate as it almost certainly lacks the needed support.
After meeting Trump, bin Salman’s two-week visit to the U.S. is scheduled to include meetings with other senior officials, including Defense Secretary James Mattis and CIA Director Mike Pompeo.