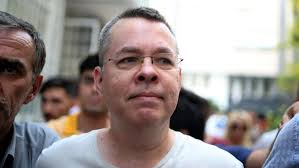 US President Donald Trump said on Friday an American pastor freed by Turkey after two years in detention would be returned “soon” to the United States.

“PASTOR BRUNSON JUST RELEASED. WILL BE HOME SOON!” Trump tweeted, after a Turkish court sentenced Andrew Brunson to just over three years in jail but released him after taking into account time served and good conduct.

Brunson’s detention since 2016 caused one of the worst diplomatic rows of recent times between Nato allies Turkey and the US, and a crash in the Turkish lira that exposed the country’s economic fragility.

Turkish judicial authorities had repeatedly rejected requests for the release of Brunson, who was moved from prison to house arrest in the city of Izmir in July.
When the verdict was read out, Brunson wept and hugged his wife Norine.

“My thoughts and prayers are with Pastor Brunson, and we hope to have him safely back home soon!” Trump had tweeted earlier, shortly after posting that he was “working very hard” on the case.

US broadcaster NBC said Turkey and the United States had reached a secret deal for Brunson to be released on Friday, with some charges against him dropped, in exchange for the US easing “economic pressure” that included sanctions that have hammered the lira. – AFP