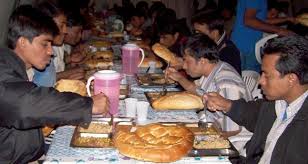 A Turkish aid group organized an iftar (fast-breaking meal) program for Rohingya Muslims in Bangladesh, where thousands have sought refuge.
In a statement on Saturday, Turkish Cooperation and Coordination Agency (TIKA) said it had sent food aid to 25,000 Rohingya and organized an iftar for 1,500 people.
Mahmut Cevik, TIKA’s head of the Balkans and South Europe department, during the iftar program recalled the hardships the Rohingya are going through.
He said: “Turkey was with you yesterday, will be with you today and tomorrow.”
Ahmet Refik Cetinkaya, TIKA’s Bangladesh coordinator, extended Ramadan greetings to the Rohingya.
Ahead of the iftar program, TIKA officials visited the shelters of Rohingya and listened their problems. They also distributed food aid to families and gave gifts to the children.
The aid agency provides food to 6,000 Rohingya Muslims at the refugee camps every day and food aid to thousands.
Since Aug. 25, 2017, some 750,000 Rohingya, mostly children and women, have fled Myanmar after Myanmar forces began a crackdown on the minority Muslim community, according to Amnesty International.
At least 9,000 Rohingya were killed in Myanmar’s Rakhine state from Aug. 25 to Sept. 24, 2017, according to Doctors Without Borders.
In a report published last December, the global humanitarian group said the deaths of 71.7 percent or 6,700 Rohingya were caused by violence. They include 730 children below the age of 5.