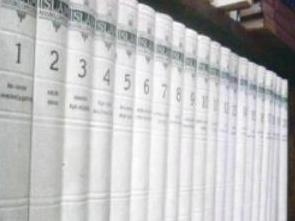 The Turkish Religious Affairs Foundation’s Islamic Encyclopedia, arguably one of the most important collections of Islamic knowledge published in contemporary times, is now available on the internet.
The encyclopedia project, which was first started in 1983 and released its first volume in 1988, was completed in December, having produced a total of 44 volumes. It was collected with the help of over 2000 experts and scholars on Islam.
Covering a wide range of topics from Islamic sciences, history, geography, culture and civilizations, the encyclopedia contains 15,226 titles, quoting around 500 sources. When sub-headings are including, the number of titles increase to 16,855.
It also contains sociological information about the Muslim world from Morocco to Indonesia, as well as information about Muslim communities in non-Muslim countries.
Although the encyclopedia is in Turkish, as well as proving to be a vital source for Turkish-speaking theologians, the encyclopedia will also prove an important source for all academics seeking enlightenment on all matters related to Islam.