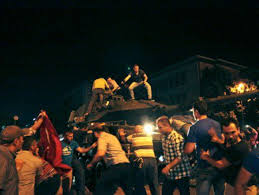 An attempted coup by a faction of the armed forces has been quashed, Turkey’s acting military chief of staff says.
Umit Dundar said 104 coup plotters had been killed and 1,563 arrested in a night of gunfire and explosions in Ankara, Istanbul and elsewhere.
A further 90 people died and 1,154 people were injured as thousands of Turks heeded President Erdogan’s call to rise up against the coup-plotters.
It is not known who was behind the attempted putsch.
President Recep Tayyip Erdogan blamed a “parallel structure”, in a clear reference to Fethullah Gulen, a powerful but reclusive US-based Muslim cleric he accuses of fomenting unrest.
However, in a statement, Mr Gulen rejected any suggestion he had links to the events, saying he condemned “in the strongest terms, the attempted military coup in Turkey”.
Erdogan, who had been holidaying on the southwest coast when the coup was launched by a faction in the armed forces, flew into Istanbul before dawn on Saturday and was shown on TV appearing among a crowd of supporters outside Ataturk Airport.
The uprising was an “act of treason”, and those responsible would pay a heavy price, he later told reporters at a hastily arranged news conference. Arrests of officers were under way, and it would go higher up the ranks, culminating in the cleansing of the military, he said.
Soldiers took control of the airport soon after Erdogan had landed, Reuters witnesses said. A senior official later said the soldiers were loyal to the government.
Rebel soldiers who had taken control of military aircraft were still firing from the air early on Saturday and fighter jets had been scrambled to intercept them, Prime Minister Binali Yildirim said, underscoring the chaotic situation.
Gunfire and explosions rocked both the main city Istanbul and capital Ankara in a chaotic night after soldiers took up positions in both cities and ordered state television to read out a statement declaring they had taken power.
A senior official said 90 people had been killed in the violence in Ankara alone, most of them civilians. More deaths were also reported in Istanbul.
Early on Saturday, Reuters journalists saw around 30 pro-coup soldiers surrender their weapons after being surrounded by armed police in Istanbul’s central Taksim square.
They were taken away in police vans as a fighter jet repeatedly screeched overhead at low altitude, causing a boom that shook surrounding buildings and shattered windows.
A successful overthrow of Erdogan, who has ruled Turkey since 2003, would have marked one of the biggest shifts in the Middle East in years, transforming one of the most important U.S. allies while war rages on its border. A failed coup attempt could still destabilise a pivotal country.
Before returning to Istanbul, Erdogan appeared in a video call to the studio of the Turkish sister channel of CNN, where an announcer held up a mobile phone to the camera to show him. He called on Turks to take to the streets to defend his government and said the coup plotters would pay a heavy price.