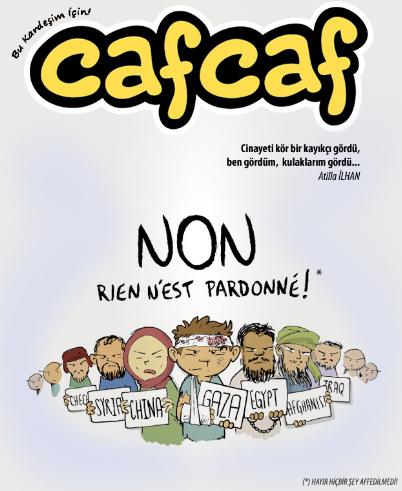 Turkish satirical magazine Cafcaf, the only publication in Turkey which places emphasis on Islamic values, has hit back to the Charlie Hebdo arrogance with a unique cover.
Cafcaf magazine has responded to Hebdo with an equally moving magazine cover in French – who have massacred human rights in the name of liberal, modern Europe – saying “Non, rien n’est pardonne” translated as “NO, nothing has been forgiven”.
“Arrogance has become a habit of the European culture, who have placed themselves above others in a position where they are free and unquestionable and in turn, have elicited a significant response from the entire world,” the magazine said in a statement.
Charlie Hebdo, in their latest publication had put a caricature depicting the Prophet Mohammed shedding a tear and holding up a sign saying “Je suis Charlie”, the message of solidarity with the victims. Above the cartoon are the words, “All is forgiven”.
Cafcaf, in answer to Charlie Hebdo, showed pictures pointing to those who have been oppressed in Afghanistan, Gaza, Chechnya, Iraq, Syria, Egypt and China, with a Palestinian child in the front middle, all whose blood is still being spilt, saying nothing will be forgiven.
A weekly publication, the latest edition of Charlie Hebdo saw a reprint of 3 million magazines. Because of its its financial limitations, Cafcaf can only print once a month. It will only be able to reprint 25,000 in the upcoming issue in February.