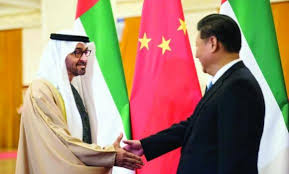 The UAE and China have established a joint strategic investment fund worth $10 billion, the UAE’s state news agency reported, as China pursues its ambition to rebuild Silk Road trade routes.
The agreement was clinched during a three-day visit by Abu Dhabi Crown Prince Sheikh Mohammed bin Zayed Al-Nahyan to China, and follows a cooperation deal between state-owned oil companies in both countries.
“The launch of this strategic fund with commercial goals builds on the next phase in our partnership in our quest to work in a close way to develop the economies of the two countries and take part in the growth of the global economy,” Sheikh Mohammed was quoted as saying by the WAM news agency.
The fund, which will be financed equally by both countries, will pursue a range of opportunities in various asset classes including greenfield projects, in which operational facilities are built from scratch.
The report quoted Chinese president Xi Jinping as saying that “the fund will play a pivotal role in supporting the strategy of ‘One Belt One Road’.”
Announced two years ago, the plan to rebuild Silk Road trade links with Europe and Asia aims to extend China’s global influence through financing infrastructure projects in 65 countries and to win new markets for Chinese companies.
The new fund will be administered and managed by Abu Dhabi state fund Mubadala on the UAE side. A subsidiary of China Development Bank and the State Administration of Foreign Exchange will act on Beijing’s behalf.
The fund joins others set up by the UAE and Abu Dhabi, the largest emirate in the country, to invest with different countries, including Russia and France.
It also comes after China National Petroleum Corp. signed on Sunday a strategic cooperation agreement with Abu Dhabi’s Mubadala Petroleum to collaborate on upstream oil and gas investment and related projects outside the UAE.
Meanwhile, Abu Dhabi’s Masdar said it had agreed to work with parties including China Vanke and China Merchants New Energy Group for projects including real estate development and renewable power generation, according to a separate WAM report.