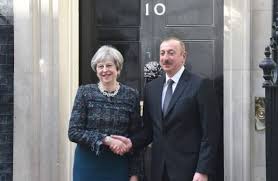 The leaders of the U.K. and Azerbaijan agreed on the importance of bilateral relations and “of our cooperation on issues of shared interest, including regional security and energy,” a government statement said Thursday.
The statement came following a meeting between Prime Minister Theresa May and Azerbaijan’s President Ilham Aliyev in London.
May expressed her pleasure that Aliyev had chosen to visit the U.K. so soon after his inauguration after elections in Azerbaijan earlier this month.
The leaders “agreed on the importance of the U.K.-Azerbaijan relationship and of our cooperation on issues of shared interest including regional security and energy,” the statement said.
May and Aliyev “noted the commercial opportunities presented by our close ties, underlined by the sixth Production Sharing Agreement between BP and SOCAR which they witnessed being signed following the meeting.”
The two leaders also discussed matters of regional and global security, and “agreed on the need to restore international norms against chemical weapons use”.
“The prime minister thanked President Aliyev for Azerbaijan’s continued contributions to regional security, including through its support to the NATO mission in Afghanistan,” the statement added.
“They spoke about the threat to security posed by foreign fighters returning from Syria and Iraq, and agreed on the importance of continued close cooperation and information sharing between our security services,” it said.
During the meeting, May and Aliyev also talked about “democracy and human rights in Azerbaijan”, and also “agreed that the U.K. and Azerbaijan would continue to work to address concerns both bilaterally and through multilateral organizations in order to support sustainable development and modernization in Azerbaijan.”