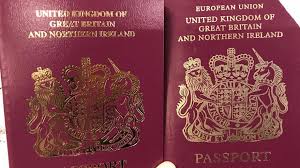 Britain has begun issuing passports with the words “European Union” removed from the front cover — despite Brexit being delayed and its political leaders deadlocked over how to extricate the country from the bloc.
The interior ministry said Saturday that a longstanding decision to start introducing passports without reference to the EU had gone ahead from March 30, the day after the original date for Brexit.
Prime Minister Theresa May has delayed leaving the bloc after 46 years of membership amid stubborn opposition in parliament to the divorce deal she finalized with European leaders in November.
Britain’s interior ministry meanwhile confirmed that some newly issued passports now omit references to the EU on the cover, while others still bear the bloc’s name.
The discrepancy was due to an attempt to save public money by using up “leftover stock,” but both designs would be “equally valid for travel,” they insisted.
“Passports that include the words ‘European Union’ will continue to be issued for a short period,” a spokeswoman said.
British passports had already become ensnared in the country’s Brexit divisions after the government announced in 2017 it would return to traditional blue passports “to restore national identity.”
The travel documents had dark blue covers from 1921, but Britain switched to burgundy from 1988, in common with other members of the-then European Community.
Last year it emerged that Franco-Dutch company Gemalto had won the contract to make the new blue passports, prompting fury from Brexit campaigners and more ridicule from Remainers that a British company was not chosen.
The new production contract is to begin in October 2019, with passports currently being issued in the burgundy color.