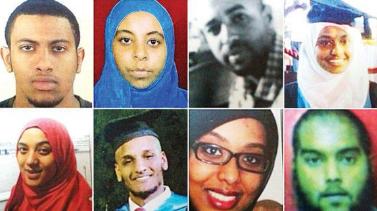 A group of British medical students of Sudanese origin who went missing after traveling to Turkey are feared to have crossed into Syria to join the Islamic State (IS) group as doctors, reports and sources said on Sunday.
The families of the students have traveled to the Turkey-Syria border in a desperate appeal for them to return home before it is too late, a Turkish opposition MP said.
According to reports in Britain’s The Guardian newspaper and the BBC, nine young students flew to Istanbul from the Sudanese capital Khartoum on March 12 and then overland by bus toward Syria.
They have been joined by two other medics from the US and Canada, also of Sudanese origin, the BBC said.
A Turkish MP from the Republican People’s Party (CHP) Mehmet Ali Ediboglu, who represents the Hatay region bordering Syria, wrote on his Facebook page that he was helping the families in their search.
“Eleven doctors — nine British and two Sudanese — came to Turkey a week ago to join the IS,” he said.
“The families of the young people have been in Turkey to search for them and bring them back,” he added.
“Our greatest hope is to save the doctors from the IS and reunite them with their families.”
Ahmed Babikir, students’ dean at Khartoum’s private University of Medical Sciences, told AFP that five students of the university were missing after traveling to Turkey.
“They all have British passports and are of Sudanese origin,” he said.
“Their families have traveled after them to stop them from joining IS. We are not able to confirm they have crossed into Syria.”
The Guardian said on its website that the alarm was raised when one of the youngest members of the group, Lena Maumoon Abdulqadir, 19, sent a brief WhatsApp message to her sister in Britain.
The message contained a picture of the teen smiling in a selfie picture, saying they were in Turkey and on their way to Syria.
The British Foreign Office meanwhile said: “We are providing consular assistance to their families and we have informed the Turkish police to try and ascertain their whereabouts.”