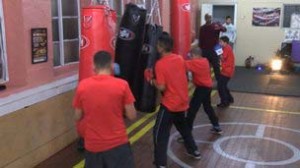 Countering increasing crime rates in England, the first- ever mosque boxing gym has opened its doors in a Sheffield neighborhood, welcoming all faiths and people.
“In July 2012, the number of the anti-social behaviors cases in this area were more than 126,” Wajid Nazir, the Founder of One Nation Community centre told BBC on Wednesday, January 8.
“But by the end of 2013 they were up to 100 cases, so we need to be sustained we need to be helped to carry out more of what we are doing.”
Located in the One Nation community centre in the Jamia Masjid and Usmania Education Centre in Netheredge, the boxing gem welcomes all people from different faiths in the Sharrow Vale and Netheredge parts of the city.
“The Centre welcome people from different backgrounds and religions,” said Max Cundy, a trainee at the boxing centre.
Refreshing the trainees in the community centre, a surprise visit of Paul silky Jones, the former double world champion, has cheered them granting them a fun time with the a boxing ideal.
“The world championship brings a lot of money to the trainers, you are anticipating to each other, you will get to think about all different races all different genders all community categories so it teaches you a lot about yourself” Jones said.
Britain is home to a sizable Muslim minority of nearly 2.7 million.
In July 2012, a report by the Institute for Social and Economic Research at the University of Essex found that Muslims are the most likely of all groups to be identified with the concept of ‘Britishness.’
In 2011, think tank Demo found that Muslims in the United Kingdom are more patriotic than the rest of population.
Responding to the statement “I am proud to be a British citizen”, 83% of Muslims said they are proud of being British.
The percentage came higher than average across the population which scored only 79%.