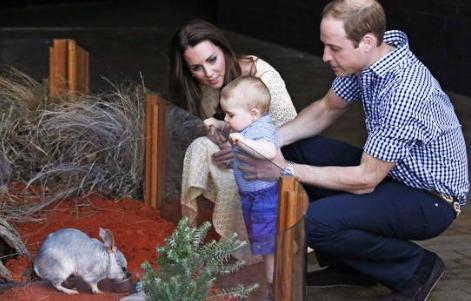 Prince William and his wife Kate have threatened to take legal action against a photographer they say has been monitoring their toddler son Prince George.
The couple’s Kensington Palace office said Thursday the royals had “taken legal steps to ask that an individual ceases harassing and following both Prince George and his nanny as they go about their ordinary daily lives.”
In a statement, the palace said the unnamed photographer was suspected of “placing Prince George under surveillance.”
The statement was issued after the Evening Standard newspaper reported that a photographer had tried to take pictures of the prince in London’s Battersea Park.
William and Kate, who are expecting their second child, want to spare their children intense press coverage.
Fourteen-month-old George is third in line to the throne. The statement said that the royal couple “understand the particular public role that Prince George will one day inherit, but, while he is young, he must be permitted to lead as ordinary a life as possible.”
William’s late mother, Princess Diana, was pursued by photographers for years before her death in a Paris car crash in 1997. Many believe the pursuing paparazzi were a contributing factor to the accident.
The British media now operate under an agreement to leave members of the royal family alone when they are children in return for regular scheduled photo shoots.