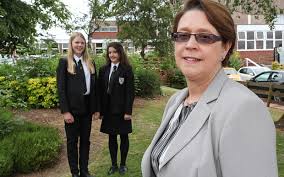 A headmistress at a British high school has banned short skirts to protect male teachers who were becoming “distracted” by the girls’ high hemlines.
Dr Rowena Blencowe from Trentham High School in the UK took the drastic action after she became tired of reprimanding girls for showing too much leg and wearing skirts that “barely covered their bottoms”.
According to the headmistress, male members of staff where also embarrassed by the skirts and telling female pupils to roll them down.The school even paid for new skirts for the rebellious girls – who consitently turned up to classes in “totally inappropriate” uniform.
The head teacher has now resolved the issue by banning skirts altogether and enforcing students to wear trousers as of next September.
“It’s been an increasing problem over the past two years, especially with the older pupils in Years 9, 10 and 11,” she said.
“Girls in year seven, and possibly year eight, tend to abide by the rules, but as they get older the skirts get shorter. Now it’s just a constant nag. Girls are coming in with skirts that just cover their bottoms – it’s totally inappropriate.
“If a skirt is too short, the student is warned and a length of time is agreed for the issue to be resolved, but girls are still coming in with consistently short skirts.
“We’ve tried calling parents, sending pupils home and we’ve even had to buy some girls new skirts – which isn’t something a school should have to do.
“It’s not pleasant for male members of staff and students either; the girls have to walk up stairs and sit down and it’s a complete distraction”.
School governor Terry Follows added: “The governors are unanimously behind the head teacher on this.”