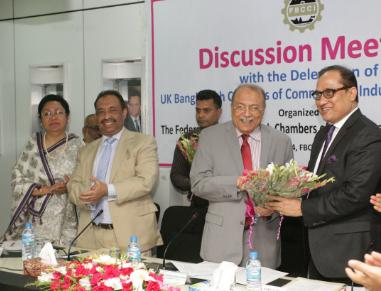 UK-Bangladesh Catalysts of Commerce and Industries (UKBCCI) Leaders today met with foreign minister AH Mahmud Ali MP and education minister Nurul Islam Nahid MP at their respective ministry as part of network building mission at the policy making level of the Government and discussed different possibilities to enhance UK-Bangladesh bilateral business, trade relation as well as create entrepreneurs with the view to explore newer opportunities that would benefit both the countries.
The meetings were held as the first step of the UKBCCI venture of working as economic ambassadors to Bangladesh in extend to promote the positive image of Bangladesh in front of Europe and the western world. The ministers highly appreciated the UKBCCI initiative promising them all sorts of cooperation from the government end and asked them to work closely with the existing trade bodies of the country in order to achieve the development goal of the government by the year 2021.
Foreign minister Mahmud Ali MP said, our GDP growth has reached 6% and per capita income has exceeded one thousand dollar under the able leadership of the current government. He asked them to portray a positive brand of Bangladesh before the world through working in a concerted effort along with top trade bodies e.g. FBCCI and BGMEA. Among others, Director General of the foreign ministry Asad Alam Siam was present at the meeting.

On the other hand, Education Minister thanked the top British-Bangladeshi enterprise saying, we want to depict Bangladesh as a development model before the world. He mentioned the education sector as one of the low investment sector of the country and, hence, called the trade body to come forward in meeting up the challenge. `We need to give emphasis on the employment opportunities while investing in the education sector. Education Secretary Dr. Mohammad Sadik suggested undertaking a feasibility study to this end for exploring areas of utilities of such investment.
Chairman of UKBCCI Iqbal Ahmed OBE said, as successful entrepreneurs in the UK we are looking reward to investing in the finance, RMG, food processing, tourism, ICT, Healthcare, Education and other sectors besides working with Europe and the Western World as economic ambassadors of the country. `We want to create huge employment opportunities for the people of Bangladesh while sharing our invaluable experience and high level network for the benefit of the young generation. 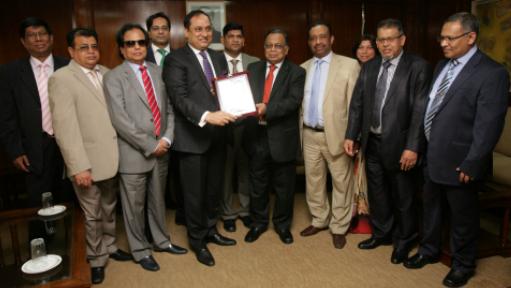 President of the UKBCCI Bajloor Rashid emphasized on importance of building up a massive network to utilize the business potential of the country and said, we have more than 12 thousand restaurants in the UK which is in a huge demand of skill workforce. However we fail to exploit the opportunity as we do not have proper training institute as does our neighbor India. We also plan to advise future entrepreneurs on how to grow up successful entrepreneurs which would boost up the momentum of our economy.
Later, the UKBCCI leaders met with Senior Secretary of the Commerce Ministry Mahbub Ahmed and Senior Officials of the Finance Ministry highlighting on their portfolio as well as their future working plan. Afterward, they had an official meeting with the top business body of the country FBCCI leaders headed by its president Kazi Akram Uddin Ahmed and the others.
Participants at the meetings, among others, were MA Rouf JP, Jamal Uddin Mokkodus, Abdul Malik, Nazmul Islam Nuru, Azad Ali, Barrister Anawar Babul Miah and Rohema Miah.