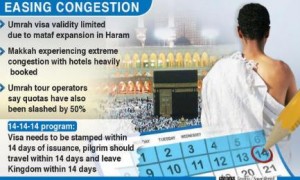 The Haj Ministry has decided to limit the validity of Umrah visas to only 14 days because of the ongoing work to expand the mataf — the cicumambulation area.
According to a circular sent to Umrah agencies in the Kingdom and Saudi missions abroad two days ago, the new rule becomes effective Monday.
“Yes, we have received a circular from the Saudi Embassy in New Delhi informing us that Umrah pilgrims will only be given 14-day visas from Shaban 1,” said Mohammad Abdul Razzak, a travel agent in Hyderabad, India.
He said it would come as a shock to hundreds of Indian Muslims who visit Makkah and Madinah during Ramadan. “Naturally, everyone who visits Saudi Arabia for religious pilgrimage would want to stay in Makkah and Madinah for as long as they can,” he said. “However, we are told by our counterparts that it is very congested out there in Makkah and that the hotels are heavily booked for the coming two months.”
Rahman Azim, who works for an Umrah operator in Jeddah, said the rule is for all nationalities. “There is a good reason for the decision. It will lead to more people performing Umrah because of the constant movement of foreign pilgrims,” he said.
According to Azim, the new step is being described in travel circles as 14-14-14. “Once the Umrah visa is issued, it will remain in the system for 14 days, meaning it should be stamped within 14 days of the issuance,” he said. “Once it is stamped, the person should travel within 14 days, and then once the pilgrim is in the Kingdom, he should leave within 14 days.”
According to local Umrah tour operators, their quotas have also been slashed by 50 percent. “We were given half of what we used to get in the past,” said Nusrat Javed, an employee at a Makkah tour operator. “This has led us to cancel our hotel bookings which we had done in advance in anticipation of a surge in demand.”
Munir Rahman told Arab News from Lahore that he obtained a one-month Umrah visa last week. “But when we applied for an Umrah visa for my mother two days ago, we were told it would be valid only for two weeks,” he said. –SIRAJ WAHAB