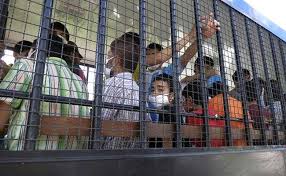 The UN’s Committee on the Elimination of Racial Discrimination has called on China to release the detained Uighurs in Xinjiang, an autonomous region in the country.
The report, adopted by the committee at its 96th session between August 6-30, said the committee is “concerned” by the Chinese legislation having a “broad definition of terrorism and vague references to extremism and unclear definition of separatism.”
It said these definitions may “have the potential to criminalize peaceful civic and religious expression and facilitate criminal profiling of ethnic and ethno-religious minorities, including Muslim Uighurs and Buddhist Tibetans and Mongolians.”
The committee emphasized there were reports stating certain Tibetans, Uighurs and other ethnic minorities, peaceful political protestors and human rights defenders, have been tortured or subjected to ill-treatment.
“It is further concerned by reports that certain Uighur detainees have been held incommunicado for prolonged periods, putting them at risk of torture and other ill treatment,” it said.
Although there is no official data, it estimates that there may be up to a million detainees, held for “even nonthreatening expressions of Muslim ethno-religious culture like daily greetings.”
The report also said the ethnic Uighur groups were “disproportionately” targeted, including with baseless police stops, scanning of mobile phones, and collecting extensive biometric data — DNA samples and iris scans.
The travel restriction for the Xinjiang residents also has a high impact, particularly for those who wish to travel for religion purposes, while Uighurs who left the country were allegedly brought back to China against their will.
The committee called on China to “immediately release individuals currently detained under these circumstances, and allow those wrongfully held to seek redress.”