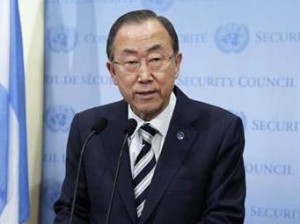 UNSecretary-General Ban Ki-moon, saddened by the deadly violence that marred parliamentary elections in Bangladesh, has today urged restraint, calling such violence “unacceptable” and appealing to the political parties to urgently address the expectations of the country’s people for an inclusive political process.
In a statement issued by his spokesperson, the UN chief expressed sadness at the loss of life and violent incidents that marred the yesterday’s parliamentary elections, which were characterized by polarization and low participation.
“He regrets that the parties did not reach the kind of agreements which could have produced a peaceful, all-inclusive election outcome,” the statement said.
Mr. Ban in the statement called on all sides to exercise restraint and ensure first and foremost a peaceful and conducive environment, where people can maintain their right to assembly and expression. “Violence and attacks on people and property can never be acceptable,” he said.
The Secretary-General called on the political parties to resume meaningful dialogue and to urgently address the expectations of the people of Bangladesh for an inclusive political process. “The UN will continue to support the country’s democratic processes in accordance with the principles of inclusiveness, non-violence, reconciliation and dialogue,” he said.