United Airways (UBD) today announced an ambitious investment plan that will attract the funds it needs to operate new routes from major UK and European cities direct to Bangladesh with a focus on direct flights to Sylhet. United Airways (UBD)  is the only private airline in Bangladesh that has the permission to fly from UK.
Recognised as Bangladesh’s largest and fastest growing private airline, the company currently operates direct routes from Dhaka to Calcutta, Dubai, Katmandu, Jeddah, Kuala Lumpur, Muscat, Doha, Singapore and Bangkok and internal flights to all domestic airports.
More than £100 million will be invested in doubling the size of the fleet and introducing new larger aircrafts from Boeing and Airbus that are energy efficient and capable of non-stop long haul flights. United Airways (UBD) will have the option to operate its new routes from London Gatwick, Birmingham and Manchester direct to Sylhet and Dhaka. All aircrafts will have modern economy and luxury business class interiors with international quality service and the latest in-flight entertainment to compete with other world-class airlines.
The United Airways BD’s consistent year on year growth since it was first licensed in 2007 reflects the professionalism and experience of its leadership, management, and most importantly its pilots and crew. United Airways (UBD) is the only Bangladeshi airline that survived the global economic crash of 2008 and has impressed its shareholders with average annual returns of more than 10%, with 47% dividends given to shareholders in the last 4 years.  Profitability factors included operating different types of small aircraft that allowed flexibility in scheduling and fuel use efficiency at a time when fuel prices were high.
Founding Chairman and Managing Director, Captain Tasbirul Choudhury, explains why 2015 will be a big year for the company. 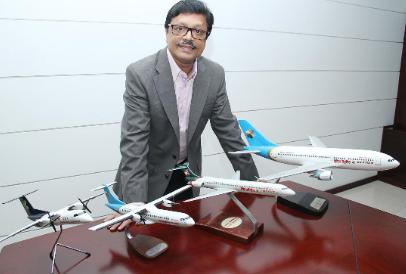 “Demand is high with growth in the domestic market at 6% and internationally at 8%. Foreign airlines are requesting doubling of flights to Bangladesh proving the market is strong. Fuel costs are falling and aircraft energy efficiency has increased. UBD has had more then 56,000 flights and carried over 4 million passengers without any major incidents. We believe this is our time to expand into the European market.”
United Airways Investment Fund is a new mechanism where expatriate Bangladeshis living in the UK and other countries can share in the growth of this dynamic and exciting industry.  Captain Choudhury explains the benefits:
“United Airways (UBD) was started in the UK by a group expatriate Bangladeshis, it has now become the largest company in Bangladesh in terms of number of shareholders, United Airways (UBD) has over 135,000 Shareholders in the capital market. Once again, we are offering an amazing opportunity for the expatriates to be part of our expansion plan.”
“By investing you can be a major stakeholder in one of the world’s fastest growing airlines and be treated as a VIP every time you fly with us.  You will be part of the most exclusive club in the skies – one that will make our country and the UK proud of our vision, ambition, and achievement.”
The new funding will ensure that a Bangladeshi airline and its Bangladeshi shareholders and investors benefit from the upsurge in flights to the country.