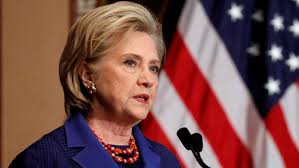 “Trump and his cronies do so many despicable things that it can be hard to keep track. I think that may be the point—to confound us, so it’s harder to keep our eye on the ball,” she wrote in an essay published by The Atlantic magazine.

“The ball, of course, is protecting American democracy. As citizens, that’s our most important charge. And right now, our democracy is in crisis,” she said.

In her essay, she said U.S. institutions and traditions were under siege.

“We need to do everything we can to fight back. There’s not a moment to lose.”

She said there were five main fronts where she sees an “assault” on the country’s democracy, citing attacks on the rule of law, doubt on election legitimacy, the president’s war on truth and reason, his breathtaking corruption as well as his undermining of national unity.

Clinton called for a “massive turnout” in the 2018 midterms, which she said could help provide more congressional oversight of the White House.

“Democracy may be our birthright as Americans, but it’s not something we can ever take for granted. Every generation has to fight for it, has to push us closer to that more perfect union. That time has come again,” she added.