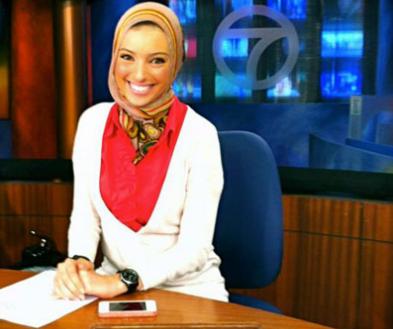 Driven by her childhood dream of becoming a journalist, a Muslim American woman aims to be the first-ever veiled anchor on commercial television in America, defying the stereotyped image of the Muslim women in the mainstream media.
“I grew up knowing that I wanted to be a reporter… and basically have a way to tell stories,” Muslim journalist Noor Tagouri said in a video cited by the Huffington Post on Friday, April 10.
“I never thought I was going to wear this hijab, [but] when I did start wearing it, I decided that I still wanted to be a reporter, obviously, and I didn’t want this to stop me.”
Overcoming struggles for her identity as an American Muslim child, the Libyan-American journalist said she was driven by a fiery passion for telling great stories and asking good questions.
“My name, Noor, means ‘light.’ My middle name is Alhuda, so Noor Alhuda means ‘the guiding light,'” she says.
“My name itself inspires me to be that guiding light.”
The 21-year-old Tagouri was finally able to fulfill her dream after launching her social media campaign #LetNoorShine or, “let light shine”, in 2012, to encourage herself and others to pursue their dreams.
“I started #LetNoorShine when I decided I was going to be very vocal about what I was doing to become a hijabi journalist on television — on American television,” Tagouri said.
Proudly wearing the hijab, Tagouri has about 89,000 followers on her official Facebook page.
Islam sees hijab as an obligatory code of dress, not a religious symbol displaying one’s affiliations.
Ambitious Journalist
Recognizing the journalism major student’s outstanding spoken word performance on World AIDS Day several years ago, CBS Radio’s community and public affairs director, Justine Love, offered Tagouri an internship when she was 18.
“I prayed a prayer we call Istikhaarah, which is the guidance prayer,” Tagouri said.
“I prayed it the night before my performance, asking God for an internship or a job or something.”
For the junior journalist, landing the CBS Radio internship was a crucial step towards achieving her dream.
“Literally, that internship changed my life,” Tagouri says.
“That was the start of when #LetNoorShine was starting and when things just started falling into place. It was opportunity after opportunity, and it was just from that guidance, just from that prayer.”
Despite the support and praise she receives, Tagouri faces bias by some.
“There have been so many times where I have been knocked down, where people told me I wasn’t going to be able to do it, where people in the newsroom that I was interning at would go behind my back… saying, ‘Who does she think she is? Does she not know that this isn’t going to happen for her?'” Tagouri says.
“But they don’t realize that this generation, right now, is an upcoming generation. Things are changing. People are going to get used to it. People… want diversity; they want to understand each other.”
Although there are no official figures, the United States is believed to be home to between 6-8 million Muslims.
A Pew Research Center study, Public Remains Conflicted Over Islam, has revealed that the majority of Americans know very little about Muslims and their faith.
Another Economist/YouGov poll found that a large majority of Americans believe that US Muslims are victims of discrimination amid recent attacks against the community.