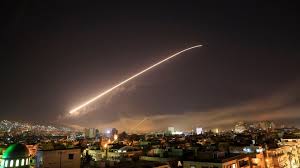 The United States, United Kingdom and France launched punitive military strikes against Bashar al-Assad’s Syrian regime in response to its latest alleged chemical weapons atrocity, President Donald Trump announced Friday.
Shortly after Trump began a White House address to announce the action, large explosions were heard in the Syrian capital Damascus, signalling a new chapter in a brutal seven-year-old civil war.
“A short time ago, I ordered the United States armed forces to launch precision strikes on targets associated with the chemical weapons capabilities of Syrian dictator Bashar al-Assad,” Trump said in a primetime televised speech to the nation.
“A combined operation with the armed forces of France and the United Kingdom is now under way. We thank them both. This massacre was a significant escalation in a pattern of chemical weapons use by that very terrible regime.”
A US official said the strikes had targeted chemical production facilities. Another official said multiple types of bombs were used, and a variety of targets chosen.Trump also warned Russia and Iran not to stand by their ally in Damascus.
“Russia must decide if it will continue down this dark path or if it will join with civilized nations as a force for stability and peace,” he argued.
The strikes had been expected since harrowing footage surfaced of the aftermath of the alleged toxic gas attack in the Damascus suburb of Douma, which took place a week ago, and Trump reacted in an emotional tweet.
“Many dead, including women and children, in mindless CHEMICAL attack in Syria,” he declared.
“President Putin, Russia and Iran are responsible for backing Animal Assad. Big price to pay.”
Trump’s anger and apparent determination was quickly matched by France’s President Emmanuel Macron, who signed his country up for a joint response.
Britain’s Prime Minister Theresa May was more cautious, but by the time the first precision cruise missile was launched, Trump had a mini-coalition.
May said there was “no practicable alternative” to the use of force against Assad.