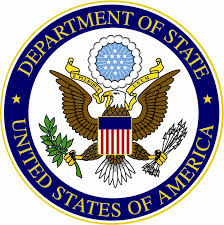 The US is “deeply concerned” about the death sentences handed out against 529 supporters of Egypt’s deposed President Muhammad Mursi, a US official said on Monday.
“While appeals are possible, it simply does not seem possible that a fair review of evidence and testimony consistent with international standards could be accomplished with over 529 defendants after a two-day trial,” a State Department official said.
“We continue to call on the Egyptian government to ensure that all those detained in Egypt are afforded fair proceedings that respect civil liberties and due process and are consistent with international standards. The law must be applied equitably and free of political bias,” the State Department official said.
“We have said many times that even the appearance of politically-motivated arrests, detentions, and convictions will set Egypt’s transition back,” the official added.
The official, citing reports of violence in response to the sentences, warned that such a reaction would not help either.
But Egypt’s army-installed interim government defended the court’s handling of the case, insisting that the sentences had been handed down only “after careful study” and were subject to appeal.
The defendants who were sentenced to death are part of a larger group of more than 1,200 alleged radicals accused of killing two policemen and rioting on Aug. 14, after police killed hundreds of protesters while dispersing two Cairo protest camps.
Of the 529, only 153 are in custody. The rest were tried in their absence and have the right to a retrial if they turn themselves in.