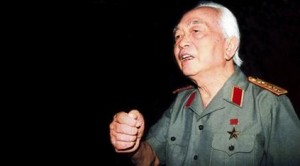 Vo Nguyen Giap, the Vietnamese general who masterminded victories against France and the US, has died aged 102.
His defeat of French forces at Dien Bien Phu in 1954 effectively ended French colonial rule in the region.
He was North Vietnam’s defence minister at the time of the Tet Offensive against American forces in 1968, often cited as a key campaign that led to the Americans’ withdrawal.
Gen Giap also published a number of works on military strategy.
He was born into a peasant family in the central Quang Binh province of what was then French Indochina.
At the age of 14, he joined a clandestine resistance movement.
By 1938 he was a member of Ho Chi Minh’s Indochinese Communist party and fled to China with Ho, ahead of the Japanese invasion of Vietnam.
Gen Giap organised an army from his Chinese exile and returned to Indochina to wage a guerrilla war against the occupying Japanese.
While he was out of Vietnam, his first wife was arrested and died in a French prison. He later remarried and had three daughters and two sons.
After his role in the war against the French, Gen Giap was credited for his leadership at the time of the 1968 Tet Offensive against US forces.
Troops ultimately under his command attacked more than 40 provincial capitals and entered Saigon, then the capital of South Vietnam, briefly capturing the US embassy. But he was not personally involved in the operation, as he was in Budapest at the time.
After the war, Gen Giap retained his position as defence minister and was appointed deputy prime minister in 1976.
However, he found himself sidelined by the regime and retired from government six years later.
In the US, news of Gen Giap’s death was noted by Senator John McCain, a former navy pilot who was shot down during the Vietnam conflict and held as a prisoner of war.
In a tweet, Senator McCain described Gen Giap as “a brilliant military strategist who once told me that we were an honourable enemy”. -BBC