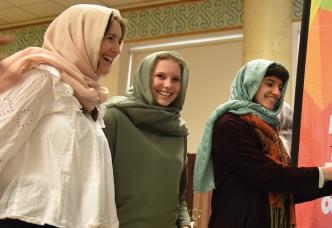 Hundreds of people visited the East London Mosque and London Muslim Centre today as part of Visit My Mosque Day, a national initiative of the Muslim Council of Britain.
The East London Mosque is one of the London’s oldest and largest mosque, which has a footfall of 1.7 million at its peak and has a Friday congregation of over 7,500 worshippers.
A large exhibition was on display in the main hall which included artefacts and material from the Mosque’s archive detailing over a century of the mosque’s history. Mosque volunteers served homemade scones and cakes, whilst children from the London East Academy mesmerised visitors with live recitation from passages of the Quran.  Visitors were able to observe the midday prayer and ask questions about the Muslim faith.
Caroline Stevens, a local teacher who visited today, said: “This is a very good opportunity for communities to come together and share each other’s heritage and culture.”
Nozmul Hussain, CEO of the Mosque and Centre, said: “Today has been an absolute success. We had visitors from all parts of London and some tourist visiting the area pour into the Mosque and ask interesting questions.
“We have an open door approach and always happy to host people of faith and no faith. I hope this initiative contributes towards removing some of the misunderstandings people have about Islam and Muslims. The more we know about one another, the more we can build up mutual trust and co-operation for the common good.
“Events such as this shows there is much eagerness from people to find out about each other. We had a positive reception for all who came today to see first-hand what happens inside a mosque, and find out about the basic beliefs and beautiful teachings of Islam which seeks to promote peace, love and happiness.”