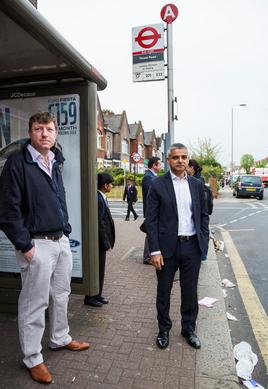 Sadiq Khan has begun his first day in office as Mayor Of London – and in a nod to his ‘son of a bus driver’ heritage, taken a bus and a Tube from his Tooting home into City Hall.
Khan’s arrival on his first day in office was markedly different from that of his predecessor, Boris Johnson.
Although famous for cycling just about everywhere, the former mayor turned up at City Hall in 2008 in a private car.
Khan was snapped as he left his home in Tooting, the constituency he represents but will step down from, early on Monday morning.
The new London mayor appeared relaxed as he casually waited for a bus at his local bus stop.
Showing his credentials as a true born-and-bred Londoner, Khan had his Oyster card at the ready before being confronted with the reader.
Mr Khan then entered his office and set out on an historic four-year tenure as London’s first Muslim mayor.
Khan added that he was “deeply humbled by the hope and trust” voters placed in him, adding: “I want to thank every single Londoner for making the impossible possible.”
He added: “I’m so proud that Londoners have today chosen hope over fear and unity over division,” in a jab at the overwhelming negative campaign run by Goldsmith.