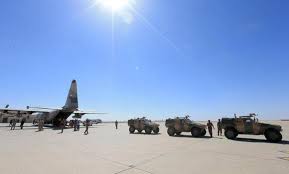 The Middle East’s largest ever war games are now underway and will boost military cooperation between the 20 Muslim nations taking part, host country Saudi Arabia said on Monday.
The Northern Thunder exercises, which began on Feb. 14 and will run until March 10, involve more than 150,000 troops from the Gulf Arab nations, Egypt, Morocco, Pakistan, Bangladesh, Jordan, Sudan and Senegal.
“The Council of Ministers … expressed the hope that these exercises achieve what was defined as their goals in exchanging expertise and raising the level of military coordination,” cabinet said in a statement.
The statement also praised “the levels of preparedness and administrative and supply capabilities” shown by the nations participating in Northern Thunder exercises.
The alliance is seen as a counterweight to Iran, which had been blamed by Saudi Arabia and other Gulf states of interference in regional affairs.
On Sunday, Prince Turki Al-Faisal said Muslim countries need to take the lead in fighting terrorism, adding that the Islamic counterterrorism alliance of 34 nations should have been created sooner.
“It’s no secret, unfortunately, that in our world today the majority of terrorism-related acts, its victims are Muslim. Therefore, it is our responsibility as Muslim countries to play the primary role in fighting this disease that has impacted us all,” said Prince Turki, who was the kingdom’s intelligence chief before serving as ambassador to the UK, Ireland and the United States.
Prince Turki said “the ball is in the Iranian court” when it comes to any hope of improving ties.
“The Kingdom of Saudi Arabia has expressed publicly that Iran’s interference in the affairs of Arab states is a situation that is unacceptable,” he said.
Saudi Arabia is leading a coalition of Muslim countries, backed by the United States, Britain and France, in a war in neighboring Yemen and says it will contribute troops if Washington leads land operations against Daesh in Syria.
Its war in Yemen, aimed at restoring a government ousted by an Iran-allied militia, is part of a more assertive effort by Riyadh since last year to counter Tehran’s influence.