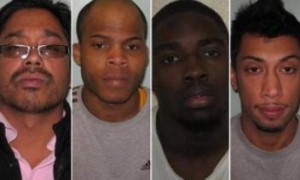 Four men who snatched £340,000 in violent hold-ups in London’s East End have been jailed for a total of more than 30 years.
They were caught on a security camera during one robbery outside a bank in Whitechapel.
It led to Flying Squad detectives tracking down the gang which had carried out two heists against the same money transfer shop in Whitechapel Road in just 10 months.
The gang targeted staff moving cash from the premises to the bank.
The first heist was in 2011 when they followed the manager’s car six miles to his home in Manor Park where they grabbed money bags from the boot.
The same money transfer shop was targeted again 10 months later in 2012, when an employee was punched and kicked on his way to a bank in Whitechapel Road and robbed of £30,000 he was carrying in a money bag.
But this time the incident was caught on CCTV which led to the gang being identified.
Det Sgt Holly Simon from the Met’s Flying Squad said after Friday’s sentences at the Old Bailey: “This was a terrifying act by a very calculated group of men who used violence to steal from a small business.”
Two gang members from Mile End got 18 years between them. Akhbar Hussain, 40, from Stileman House in Ackroid Drive, off Burdett Road, was jailed for six years, while Shetu Meah, 31, from Colmar Close off Alderney Road, got 12 years.
Abdion Hassan, 23, from Walthamstow, was sentenced to nine years and Vinton Meade, 29, from Clapton, got five years.