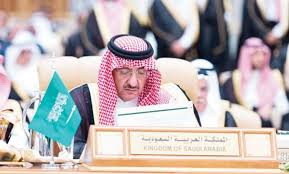 The Arab foreign ministers have called on the international community to implement the resolutions of international legitimacy over the Palestine issue and take immediate and decisive action to compel Israel to stop aggression immediately as their deeply disturbing approach not only affects the security and stability of the region but also undermines the Middle East peace process.
The Arab foreign ministers’ meeting instructed the Arab Ministerial Committee to work on necessary contacts and consultations with UN Secretary-General Ban Ki-moon to set up a special international protection system for occupied Palestine. The system would work within the framework of the report prepared by the Secretariat of the United Nations, Security Council resolutions and relevant provisions of the Fourth Geneva Convention and international humanitarian law and the law on International human rights which aim to ensure peace and prosperity in Palestine.
The ministers also urged the Security Council to reach a decision on the provision of international protection and enforcement of its relevant resolutions on Palestine, particularly Resolution 904 of 1994, which guarantees the safety and protection of Palestinian civilians in territories occupied by Israel. They also called for enforcement of the Fourth Geneva Convention on the Palestinian territories and the need to provide international protection for the Palestinian territories, including Jerusalem, and to stop Israel’s gross violations that constitute a threat to international peace and security.
Furthermore, they called for raising the issue of international protection for the Palestinian territory occupied by Israeli settlers by convening an emergency special session of the UN General Assembly in accordance with the decision of the Union for Peace in addition to working with the Committee to Eliminate Colonialism and the Committee to Combat Racial Discrimination.
The ministers held a preparatory meeting on Monday ahead of the Arab-South American ministerial meeting which set the agenda for the 4th Arab-South American Summit, known as ASPA by its Portuguese and Spanish acronym.
ASPA is a bi-regional mechanism for cooperation and political coordination which includes the 22 member-states of the Arab League as well as the 12 countries of South America and it promotes mutual relations.
Foreign Minister Adel Al-Jubeir stressed the importance of solidifying a strong and effective partnership between the Arab world and South American countries. He spoke of a “convergence of positions” between the two regional blocs on issues of mutual concern.
The cooperation among ASPA nations is organized through five secretarial committees covering economics, science and technology, environment, social and cultural affairs.
Since its inception in 2005, relations between the regions have been developed through seminars, workshops and ministerial meetings. At this fourth summit, they are seeking to boost social, political and economic ties.
On the political front, ASPA has embraced positions in line with the traditional policies advocated by developing nations such as the reform of the United Nations, which would include participation of developing nations in decision-making processes.
Developing nations want a greater focus and respect for multilateralism and international law as opposed to unilateral action, adoption of a development-oriented agenda at the World Trade Organization, the reduction of poverty, and the implementation of the United Nations Millennium Development Goals, which includes nuclear non-proliferation and disarmament.
On the economic front, there are increasing ties between South America and the Arab world. MERCOSUR, a bloc of South American countries including Argentina, Brazil, Paraguay and Uruguay, has finalized a free trade agreement with Egypt and is negotiating two others with the Gulf Cooperation Council and Jordan, and a preferential tariffs agreement with Morocco.
Although some of these negotiations have not been finalized, there have been some benefits accruing from the process, which includes commerce between South American and Arab countries growing from $11 billion in 2004 to $30 billion in 2008.
In terms of social and cultural cooperation, the main projects of the ASPA Cultural Cooperation Plan of Action are the construction of an Arab-South American Library in Algiers, the creation of the South American Research Institute in Tangiers, the opening of the Library-Research Center of South American-Arab Countries in Sao Paulo and the organization of the Arab Culture Festival in Sao Paulo.
Environmental cooperation includes Arab and South American countries exchanging experiences and cooperating in water desalination technologies, combating desertification, and monitoring climate change.
Scientific and technical cooperation has seen the nations from the two continents work on mutually beneficial information and communications technology projects.