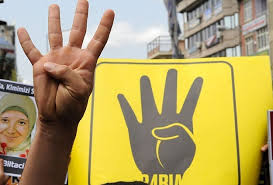 The first democratically elected president in Egypt’s history, Mohammed Morsi, was removed from office by a coup staged by the military led by Abdel Fattah el-Sisi on July 3, 2013.
The ousting of the democratically elected president sparked peaceful pro-democracy protests across the country where thousands of demonstrators set up camps at al-Nahda and Rabia al-Adawiya squares in Cairo.
On August 14, the military stormed the protest camps, killing hundreds of pro-democracy activists in what was described by Human Rights Watch as the most serious incident of mass unlawful killings in Egypt’s modern history.
The Muslim Brotherhood have issued a statement on their website that their homeland “Egypt” is “still in the grip of the hijackers – the putschists; innocent blood is still being shed; tens of thousands of honest patriotic citizens are still forcibly disappeared in the treasonous coup’s military prisons, and tens of thousands more are hounded by junta militias at home and abroad”.
“Despite the escalating wave of killings, torture, detention, kidnapping and enforced disappearances, the revolutionaries and patriotic people of Egypt are still committed to continuing the march on the path of the Revolution. On the second anniversary of the Rabaa massacre, we call on the Egyptian people and all the patriotic and honorable citizens and activists to make Friday August 14 a Day of Rage and a huge revolutionary protest against the murderers, to commemorate the martyrs”.
The Rabia Platform, set up by a group of volunteers who announced August 14 as World Rabia Day last year said, “The Rabia sign was born at the Rabia al-Adawiya square as a freedom, democracy, justice and legitimacy symbol and within short time spread all over the world,” the statement said. “The Rabia sign became the freedom sign of not only Egyptians but all the world’s oppressed peoples.”
The sign which is made by raising four fingers with the thumb resting on the palm, the sign has come to represent civilian demonstrations protesting the ousting of Mohammad Morsi, and  the ensuing violence that killed hundreds of people.
Egypt has been embroiled by violence and unrest since the military overthrew Morsi two years ago.
Since Morsi’s ouster, Egyptian authorities have unleashed a massive crackdown on his supporters, killing hundreds and detaining thousands.