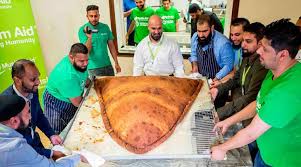 A mosque in east London has broken the record for the world’s biggest samosa and then fed it to homeless people.
The enormous snack, weighing in at 153kg, was made by a team of Muslim Aid volunteers at the East London Mosque on Tuesday.
After claiming their official Guinness World Record, the team distributed the gigantic samosa to homeless people around Whitechapel.
Residents from the nearby Booth House – the largest men’s hostel in London – were invited to enjoy a piece of the treat.
Members of the mosque said they decided to make the samosa to highlight the “generosity of Muslim people during religious festivals like Eid”.
Muslim Aid’s Zac Hussain, explained: We wanted to make a larger-than-ever version of this popular food to demonstrate visually how people of the Muslim faith work tirelessly throughout the year, and particularly during Eid, doing charitable acts to support the unfortunate in the community around them and further afield.
“The samosa will feed the homeless near our offices in London. Meanwhile, donations via Muslim Aid will feed hundreds of thousands in the developing world.”
Eid-ul-Adha – the second Eid celebration in the calendar year – will begin this year on Friday September 1 and will last four days.
Considered the most holy of the two Eids, Eid-ul-Adha is the festival of sacrifice and marks a time when Muslims are encouraged to give to those in need.
A Guinness World Records spokesperson said: “This is an impressive achievement by Muslim Aid and a lot of hard work and determination has gone into this attempt to ensure its success.
“We are pleased to welcome them to the Guinness World Records family.” 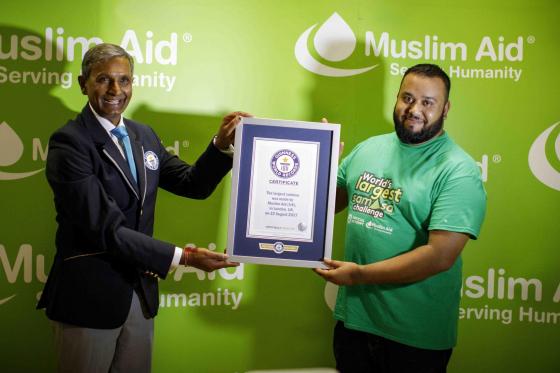