Five British Bangladeshi MP Candidates from the Labour party attended: Rushanara Ali representing Bethnal Green and Bow, Tulip Siddiq representing Hampstead and Kilburn, Barrister Anawar Babul Miah representing Welwyn Hatfield, Rupa Hoque representing Ealing Central and Acton and Mina Rahman from the conservative party representing Barking and Dagenham. Several other MPs and Lords also attended the event.
Mr Wazid Hassan Shelim, Chairman of PRiDEA said, “There is only one MP in the House of Commons who is representing more than half a million British Bangladeshis. I hope this event has made people aware that we need more British Bangladeshis involved in politics to represent their own community.”
The first session of the event was conducted by Urmee Mazhar. 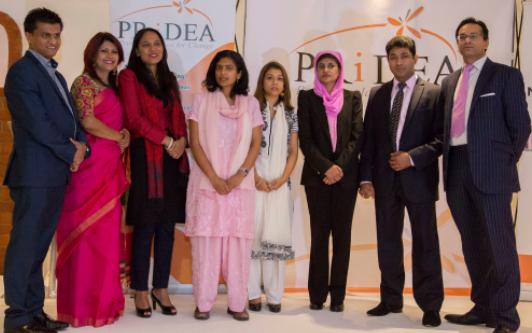 Pasha Khondakar – BCA president, Councilor Abdul Jabbar from Oldham delivered speeches amongst many others.
The main attraction of the event was the debate held by the representatives of 3 Major Political parties and the civil society. The debate session was the first of its kind in the history of British Bangladeshi Community conducted by Talha Ahmed.
Baroness Thornton from Labour party, Phill Bennion from Liberal democrats, Baroness Uddin of Bethnal Green and Neil Jameson from Citizens UK participated in the debate.
They all addressed the necessity of more involvement of the British Bangladeshi Community in the mainstream Politics.
Several people from the audience also asked several questions relating to immigration policies, opportunities in the mainstream politics and issues relating to Syria and Iraq.

Baroness Uddin of Bethnal Green said, “Labour party has advanced in securing representations from the BME communities and the other major parties yet to prove their sincerity towards the ethnic community.”
Prospective parliamentary candidate Mina Rahman said,“My selection from the conservative party proved that this party is not an elitist party, and if you have the ability to stand forward and represent your community, the conservative party will always be there to support you”
Rushanara Ali MP said,“PRiDEA consistently championed the causes which benefit the community, in particular, connecting the younger generation within the community and beyond. I am delighted to be part of it”
Celebrity Chef Rois Ali and the senior president of BCA addressed the staff shortages in the catering industry during the debate.
They also stressed the necessities of bringing skilled chefs from Bangladesh.
British Bangladeshi candidates from other parts of the UK urged the younger generation to be more involved in the political activities which will enable them to address the issues which would affect them the most.
The event was accompanied by 500 specially selected audiences from various parts of the UK.