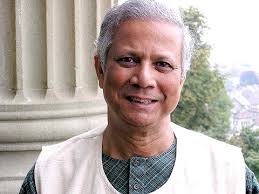 Nobel Laureate Prof Muhammad Yunus, the founder of Grameen Bank in Bangladesh and pioneer of Social Business, has ranked 5th among global influential thinkers in the Global Thought Leader 2014 survey.
The survey was carried out by Zurich-based Gottlieb Duttweiler Institute for Economic and Social Studies (GDI) and MIT Sloan School researcher Peter Gloor, said a Yunus Centre press release on Wednesday.
They have made the ‘Global Thought Leaders’ ranking through a systematic analysis of the English-speaking infosphere to determine the top 100 most influential thinkers in the world.
With the help of software-based calculations to produce a simple ‘influence rank’, Gloor presents the 2014 Thought Leaders ranking. It measures the global importance of creative minds.
Pope Francis is on top of the list, followed by ‘Pope of the Internet’ Tim Berners-Lee and Indian economist Amartya Sen and Czech writer Milan Kundera ranking second, third and fourth respectively, and the position of Peace Nobel Laureate Dr Muhammad Yunus is fifth on the list.
The 6th to 10th positions on the list are held by novelist Mario Vargas Llosa, physicist Murray Gell-Mann, novelist Paulo Coelho, anthropologist Jane Goodall and author Naomi Klein.
The top 100 of 2014 global thought leaders ranking were derived from a list of 236 people from around the world who invite further discourse through their ideas. -UNB