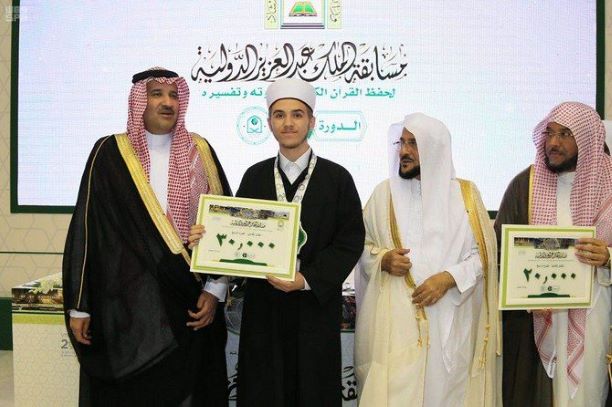 The 13 winners of the 40th King Abdulaziz International competition for memorizing, reciting and interpreting Qur’an were honored during a ceremony on Wednesday.

Prince Faisal bin Salman, Governor of Madinah, sponsored the ceremony and honored the winners at the Prophet’s Mosque in Madinah, where the competition was being held for the first time.

Prince Faisal said the prize represents how blessed Saudi Arabia is for honoring the Qur’an’s people around the world through this competition, under the patronage of Saudi King Salman.

He also commended the role played by the Ministry of Islamic affairs, Endowments, Dawah and Guidance in supervising and following on organizing the competition.

Prince Faisal highlighted the king’s “unlimited support” for those who memorize the Holy Qur’an and his patronization of local and international recitation competitions.

For his part, Minister of Islamic Affairs Dr. Abdullatif Al-Asheikh thanked the king and Crown Prince Mohammed bin Salman for their constant attention to the Holy Qur’an. He congratulated the winners, wishing them success in their future careers.