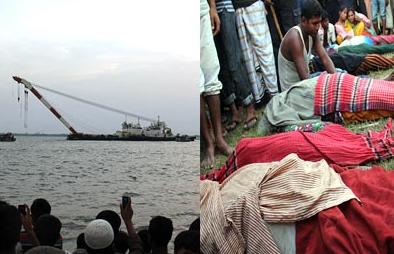 A Bangladeshi river ferry with around 200 passengers on board capsized in a storm on Thursday, killing at least 14 people, and a rescue diver said he had seen more bodies inside the wreck.
Police said some 40 people had swum ashore as the M.V. Miraj-4 capsized in high winds and rain on the Meghna river near the capital Dhaka. Most of the passengers were city workers and students heading home for the weekend beginning on Friday.
“We fear there will be more bodies inside the vessel and we cannot be sure of the number of passengers (on board),” Saiful Hassan Badal, Deputy Commissioner of Munshiganj district, told Reuters by telephone from the scene.
Bangladesh has a history of ferry disasters, with casualties sometimes running into hundreds due to overcrowding and lack of enforcement of safety standards such as numbers of lifeboats.
Bangladesh Coast Guard diver Liton said he had pulled out the body of a child of around five and had seen several more bodies in the ferry.
Some survivors were able to swim ashore despite strong currents and high waves.
“There was a sudden storm and we requested the boatswain to anchor at the riverside but he ignored us … the ferry capsized within a few seconds,” said Abdur Rahman, 50, a passenger who managed to swim ashore.
A rescue vessel sent from Dhaka reached the scene three hours after the capsize.
Twelve bodies had been recovered so far, including those of women and children, said Oliur Rahman, a police officer at the scene.