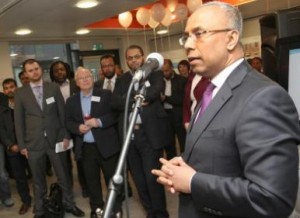 As development nears completion on one of Tower Hamlets’ largest housing schemes, key partners involved in the Ocean Estate regeneration scheme gathered together for a walk around the newly transformed area yesterday [18 March].
The £220 million scheme which has been led by Tower Hamlets Council, in partnership with East Thames Consortium has resulted in a vibrant and attractive community for residents to enjoy.
More than800 new homes have been built on the estate – of which half are affordable and 1,200 existing council homes have been refurbished inside and out.
£10 million has also been invested on landscaping improvements, including new paved and grassed play areas, increased street lighting and a new parking layout.
The area has also benefited from new community facilities including a new community centre offering an extensive GP service, housing services and space for community groups.
The regeneration was made possible through investment by a number of partners, including £42.5m funding from the Mayor of London, £41m from Tower Hamlets Council, £20m from New Deals for Communities as well as investment from East Thames Group and Bellway Homes.
Mayor Lutfur Rahman welcomed all the partners and guests to the event with a tour around the estate before speaking about the scheme.
He said: “The Ocean Estate regeneration scheme has been a long term project which has changed a whole community in the borough. Not only has it provided much needed high quality housing and refurbishment, it has brought together residents in the community who can now take ownership of their surroundings and continue to thrive.”
June Barnes, Chief Executive at East Thames Group said: “This scheme has been successful because it has seamlessly brought together the old and the new, with hundreds of well-designed high quality homes as well as improvements to the existing homes. We are also extremely pleased to have received planning approval in late February to build a further 225 homes in the area which will be a mix of affordable homes and homes for outright sale.”
The Deputy Mayor for Housing, Land and Property, Richard Blakeway said: “The Mayor is investing huge sums, as part of a long term effort to double the number of new homes being built for Londoners and address a 30 year failure to build enough. This includes working closely with local boroughs to unlock the vast potential in London’s existing housing estates. The regeneration of the Ocean estate in Tower Hamlets is providing hundreds of new low cost homes for Londoners, improving the condition of existing homes with the involvement of existing residents and creating new jobs to support the local economy.”
The programme, which aims to have a lasting, positive impact on the lives of 7,000 people living in the local area, has also delivered employment-related benefits. Throughout the project 78 unemployed people have gotten back into work and hundreds of residents have worked on the project.