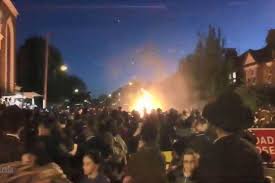 At least 30 people, including children, have been injured in an explosion during a Jewish festival bonfire in north London.
Videos recorded at the event on Wednesday night showed a bonfire being lit followed by a large explosion and a fireball engulfing the crowd standing near the fire, Xinhua news agency reported.
Ten people were believed to have been hospitalised.
Some witnesses said the explosion was sparked by mobile phones being thrown into the bonfire, a tradition for Lag BaOmer, an annual Jewish festive day.
However, Jewish website Yeshiva reported that “it appeared that the explosion was caused by fuel and not smartphones, although there definitely were multiple smartphones placed inside the pile to be burned”.