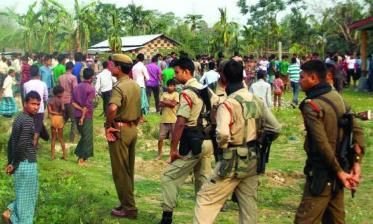 Separatist rebels wearing black masks opened fire on Muslim villagers in remote northeastern India, killing at least 32 people, mostly women and children, in two overnight attacks, police said Friday.
Police said they suspected the militants behind the overnight killings were members of the Bodo tribe.
“The gunmen entered the house and shot them dead on the spot,” a senior police officer in the state capital, Guwahati, with knowledge of the investigation told Reuters.
He was referring to an incident in which the militants shot dead three members of a family, including two women, while wounding a baby. In a second attack, eight people were killed by a group of guerrillas.
Bodo people have frequently clashed with Muslims they say have illegally entered from neighboring Bangladesh and encroached on their ancestral lands near the Himalayan kingdom of Bhutan.
Candidates in India’s general election, including opposition front runner Narendra Modi, have contributed to anti-Bangladeshi feeling in Assam.
Modi, a Hindu nationalist, last week said immigrants from Bangladesh in a nearby state should have their “bags packed” in case he came to power. He accuses the state government of being soft on immigration.
Voting was held over several days in Assam to help security forces handle any violence from several separatist and tribal militant groups active in the state. Polling in the Bodo region ended on April 24, in what residents say was a tight race between a Bodo and a non-tribal candidate. Election results are due on May 16.
Police reinforcements were sent to the two districts where the attacks took place, which have a history of sectarian violence. Dozens of police in military style uniforms and armed with automatic rifles patrolled the area, television pictures showed.” The authorities will take firm action against those involved in this crime,” said state government spokesman Nilamoni Sen Deka.
Two years ago, dozens of people were killed in clashes between Bodo people and Muslim settlers in the same area and about 400,000 people fled from their villages. The state government, led by the ruling Congress party, was criticized for not acting quickly enough to stop rioting.