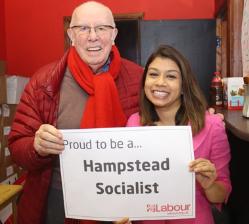 LABOUR’S general election team have printed new posters with the slogan “Proud to be a Hampstead socialist” after Conservative leader David Cameron used the term as a slight against his rivals.
TV’s best-loved curmudgeon Richard Wilson posed with one of the new placards alongside Tulip Siddiq, the party’s candidate in Hampstead and Kilburn constituency, yesterday (Wednesday) and declared that campaigners had nothing to fear from the label.
The Labour-supporting actor told the New Journal: “I don’t mind being called a socialist. I’m happy to be called a socialist.
“One of the problems with the party at one time was that the Labour Party went too far to the right, as far as I’m concerned, and that’s why I voted for Ed [Miliband] and not David [Miliband]. I thought Ed was more leaning to the left and that’s what I wanted. I think he is steering the party in that direction, and I think that’s a good.”
Asked how he thought Hampstead was being characterised by Mr Cameron’s comments, Mr Wilson, famous for playing the enduringly grumpy Victor Meldrew in One Foot In The Grave, added: “I think Hampstead gets a lot of stick, mainly because there are so many actors living there. They are always calling us posh Hampsteadites, but when I first came to London I worked in the NHS for 10 years and I lived in Hampstead because it was close to Paddington general hospital.
“I didn’t realise it was the posh part of London, but it was, it is, and I think there are a lot of good Hampstead socialists and I’m proud to be one of them.”
Ed Miliband has been saddled with caricatures about his north London life since using a conference speech to outline the hardships people face in the UK by recounting conversations he had with members of the public while walking on Hampstead Heath.
Mr Cameron seemed to be referring back to former Labour leader Michael Foot, who was famously on the left of the party but teased for living in one of London’s most expensive postcodes, in his speech on Sunday. He said Mr Miliband was the “same old condescending, bossy, interfering, we-know-best attitude of the Hampstead socialist down the ages”.
Oliver Cooper, the Conservative candidate in the Hampstead by-election, set to be held on the same day as the national ballot, said: “David Cameron is correct to say that Labour have a condescending ‘we know best’ attitude, and look down on people owning their home. But that isn’t the attitude of Hampstead residents, which is why so many will be voting Conservative on May 7.”