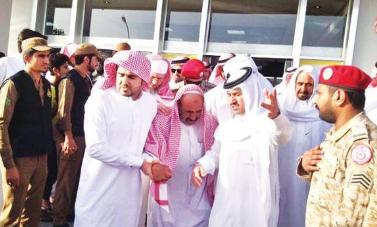 The body of Nahid Almanea, 31, who was stabbed to death in Colchester, Britain, was received by her family and a large crowd at Al-Jouf airport on Saturday.
Her funeral prayer was held at Khadem Al Harmain Mosque in order to accommodate hundreds of mourners. Amid tears, she was laid to rest at Al-Laquait cemetery.
The scholarship student from the University of Al-Jouf was stabbed to death in a hate crime last Wednesday by an unidentified man when she was on her way to the English Language Institute. The incident has sparked an outcry among scholarship students in Britain, and a large number of citizens and residents in the Kingdom.
The police had earlier announced the arrest of a 52-year-old suspect, but no proof of his link to the crime and was found. The police said that the reason behind the killing might be her Islamic veil.
Saudi Ambassador to the UK Prince Mohammed bin Nawaf held in Colchester a series of meetings with police officials and a number of Saudi students. The meetings focused on the investigation and how authorities can help the students in the city who are all living in a state of shock.
The ambassador also met with Nahid’s brother and a number of relatives and offered them condolences and briefed them on the efforts of the police.
Nahid has been described as a virtuous woman, who was seeking to serve herself, her people, and homeland through her education and knowledge.