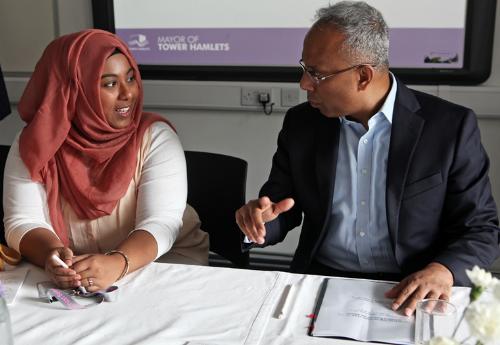 A groundbreaking scheme helping young people in Tower Hamlets with the cost of university has formally opened for a second year.
Under the Mayor’s Higher Education Award, 400 students will each receive payments totalling £1,500.
The application period for this year’s bursaries opened at 9am today (Monday, September 15). Applications can be made at www.towerhamlets.gov.uk/higher
Last year Tower Hamlets became the first council in the country to launch a higher education grant programme of this scale.
The Mayor of Tower Hamlets, Lutfur Rahman, formally opened it for a second year at St Paul’s Way Trust School this morning.
He said: “Poverty should never be a barrier to success. This scheme is aimed at making sure that not one of our young people misses out on higher education because of money.
“The overwhelming response to the scheme last year tells me that this is an initiative that is making a real difference to the lives – and to the life opportunities – of young people in Tower Hamlets.”
The council is committed to excellence in educational standards, with proven success in the entire journey of a young person through early years, primary school, secondary school and sixth form. This has been built through strong partnership working with schools, parents, governors and the council.
The awards scheme is aimed at helping to:
Make higher education a more realistic prospect for young people from poorer families in the borough
Reduce the number of local students who drop out of university before completing their courses
Encourage more school and college leavers from Tower Hamlets to attend university
Cabinet member for education and children’s services Cllr Gulam Robbani said: “It was recently revealed that Tower Hamlets is among the top 10 boroughs in the country for the proportion of students who go on to higher education.
“We want this to increase even more, and through the Mayor’s Higher Education Award and other initiatives such as launching a jobs fair with the Russell Group of Universities and expanding the sixth form provision in the borough, we are making it happen.”
Students who received one of the bursaries last year have been talking about what a help it has been.
Orin Begum, 20, is studying Law at Oxford University. She said: “I had to move for university and that means paying money on rent and utility bills and to have that extra bit of money means it’s there to rely on.
“With law books, one book costs £50 and I don’t have that kind of money so to have that extra support from the council has been indispensable. It has come in so handy.
“A lot of students really worry about money but having that support there is a reassurance and a relief from the money worries.”
Erce Kose, 20, is studying Computer Science at the University of Liverpool. He said: “My computer was in dire need of updating so I spent most of the money on components. Without the award, I would have had to have been struggling with substandard equipment so I’m really glad for the award.”
The Mayor’s Higher Education Award is being launched as a result of the success of the Mayor’s Education Award – a scheme, now in its fourth year, in which Tower Hamlets Council gives school leavers grants to help them stay in education.
Both the MEA and the Higher scheme are now accepting applications.
For full details on the Mayor’s Higher Education Award and to apply, visit www.towerhamlets.gov.uk/higher
Applications close on December 15.
The scheme is being administered by the council’s benefits team, who can be contacted on 0207 364 5001 or benefits@towerhamlets.gov.uk