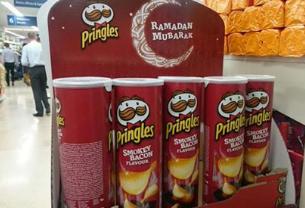 UK supermarket Tesco has backtracked on a Ramadan campaign offering “smokey bacon” flavored Pringles in a store in London, reported The Independent.
The consumption of pork is forbidden in Islam, yet ironically the bacon-flavored crisps were placed at the top of the Ramadan promotion shelf, leading to a photo going viral online.
Raza Hassan, the passer-by that noticed the odd placement, says he was not offended by the act and thought it was funny.
“When I first saw the promotion, there were many flavors of crisps – it just so happened that particular flavor was placed on top. I think it is a very nice thought and gesture from Tesco, it just seemed a bit ironic!” Hassan told i100.co.uk.
Tesco published a statement earlier that the Pringles will be removed, although the flavoring doesn’t contain actual meat products.
“We recognize these Pringles weren’t in the most suitable place and our store colleagues have no moved them,” read the Tesco statement.