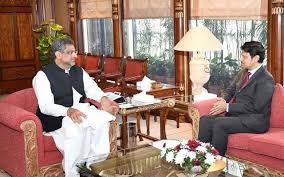 Bangladesh has called upon Pakistan to join the international community in convincing Myanmar to take back the Rohingya people.
High Commissioner Tarik Ahsan made the request to new Prime Minister of Pakistan Shaid Khaqan Abbasi in Islamabad on Tuesday during an audience, the Bangladesh High Commission in Islamabad said in a statement.
“He requested the prime minister to join international community to impress upon Myanmar to ensure a speedy repatriation of all their forcibly displaced nationals back to their homes in Myanmar,” the statement reads.
The Pakistani prime minister lauded the role played by Bangladesh in the face of the challenges posed by the influx of more than half a million additional forcibly displaced Myanmar nationals in Bangladesh.
He remarked that Myanmar should shoulder its responsibilities for the protection of all its nationals, particularly the minorities.
The high commissioner thanked the prime minister for the expression of solidarity with Bangladesh in tackling the humanitarian crisis.
He conveyed the best wishes to the newly elected prime minister who took office on Aug 1.
Welcoming the high commissioner, Prime Minister Abbasi recalled the visit of the Father of the Nation Bangabandhu Sheikh Mujibur Rahman to Lahore in 1974 for taking part in the second OIC Summit, immediately after the beginning of Bangladesh-Pakistan diplomatic relations.
He called for strengthening the bilateral relations by “removing all misgivings through dialogue”, in an apparent reference to the strained relations.
Pakistan never said sorry for the 1971 war when it killed 3 million Bangladeshis to thwart Independence.
But it repeatedly issued statements when Bangladesh started trying those who collaborated with the Pakistan Army in the killings and rapes during the Liberation War.
Abbasi stressed the need for resuming foreign secretary-level consultations.
He attached particular importance to further enhancing trade and economic relations as well as promoting people-to-people contact between the two countries.
As regards foreign-secretary level consultations, the high commissioner indicated that Bangladesh is open to hold the consultations at any mutually convenient time in Dhaka. -bdnews24