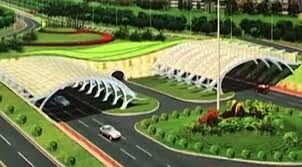 Prime Minister Sheikh Hasina has said that Bangladesh has entered a new level of development with the construction of the first ever underwater tunnel beneath the Karnaphuli River which will contribute significantly to the regions’ socio-economic development upon its completion.

“The construction of this tunnel will be completed in 2022. After that, the socioeconomic development of the region will be accelerated significantly and it will contribute to the country’s economy,” the premier said on Sunday while addressing a civic rally at Patenga Ring Road after inaugurating the boring works on Bangabandhu Sheikh Mujibur Rahman Tunnel and construction works on elevated expressway from Lalkhan Bazar to Shah Amanat Airport in Chattogram city. The PM said the link road of this tunnel will be linked with the Cox’s Bazar-Patiya four-lane road.

“For that, we’ll have to construct 10 kilometres additional road. I’ve already discussed with the secretary in this regard. The tunnel will go from Chattogram to Anwara and the road will be connected with the Patiya four- lane from Anwara. This will lessen the journey tome towards Cox’s Bazar,” PM Sheikh Hasina said.

Referring to the first elevated expressway of Chattogram, PM said after the construction of the expressway, people of the port city will be able to reach the airport very quickly and easily.

PM Sheikh Hasina added that the The government wants to work for the country and its development and this the motto of the present government. Terming Chattogram as the hub of all commercial activities, the PM said the government is doing whatever is needed for the development of this region. She said the government has a plan to construct a marine drive from Chattogram to Cox’s Bazar. “This will be constructed from Mirsharai to Cox’s Bazar, this will be very much beneficial,” she added. The Prime Minister said the tunnel will not only ease the communication, it will also boost trade and businesses, and industrialisation of this area. PM Hasina said Chattogram is not only a commercial city, this is also a city of scenic beauty.

About the government plan for the balanced development of the country, she mentioned that the government is putting in its efforts to develop the country from the grassroots level. Prime Minister Sheikh Hasina recalled late Chattogram City Mayor ABM Mahiuddin Chowdhury behind the construction of the tunnel saying that he had waged a movement to construct this tunnel. On the Padma Bridge, she said the World Bank without having any concrete evidence sketched stigma on the government, herself and on her family members.

“I threw a challenge to the World Bank to prove their allegation, but they failed to give any substantial documents,” she said. In this connection, she said that Canadian court declared the allegations of World Bank as false and baseless.

“I don’t want the Padma Bridge to be named after my name, I don’t need my name on any structure, I just want to work for the people of the country who embraced me with great affection after I had lost my father, mother and other relatives in one night,” she said.

Referring to her government’s initiative of establishing economic zones in the country, PM Sheikh Hasina said a special economic zone is also being set up in Chattogram and the aim is to attract more foreign investments to industrialise the country.